I spent the summer of 2021 cleaning up, mending, and quilting Aunt Ola's quilt top. My mom gave it to my sister, Jann, after Aunt Ola died. Jann gave it to me on a trip to Birmingham during Covid.  The quilt was a mess, these diamond shapes created from hexagons.  The layout created a parallelogram with borders that were uneven.  It was obvious that the quilt brought Aunt Ola grief as she had tried to cut some of the designs along the edges to make some sense out of the sideways-leaning design. I thought it just needed some love.  I'd always been a sucker for lost causes.

Aunt Ola hand pieced the hexagons with white and black thread along with some stitching with what might be kite string.  Many areas had some damage or had come unstitched.

I went to the Quilt Shop in Hendersonville and bought some unbleached muslin for the backing.  I chose not to use batting, making a lightweight quilt. I bought some quilt needles and thread.  I had to cut the muslin in half to create the backing.  On a trip back to Birmingham my sister, Jann, sewed the two halves together on her machine so that the backing would fit under the quilt top.

As I worked on the quilt, my own grief was on the mend. It had been a year since my partner died. I quilted each hexagon except the black ones around each design and mended the seams and damaged pieces as I quilted.  And as I quilted I thought about Aunt Ola, my mother-in-law, Jewell, who taught me how to quilt.  Both women have passed. I wondered what my Aunt Ola had made with the scraps that created this quilt. I thought about my grandmother, who I never met, but whose quilt hangs in my bedroom along with a specially-made-for-me quilt hanging from Jewell.  I thought about all the women who saved scraps and created beautiful quilts for families and friends, all the unknown artists whose creations have long been forgotten.  I hoped Aunt Ola was watching and smiling. I knew Jewell was rolling her eyes at these uneven stitches.

I realized that to square the quilt, I would need two right angle triangles to fill in the spaces caused by the leaning design.  But before that, I had to decide where the quilt would begin and end.  The places that had been cut off, leaving irregular edges, had to be cleaned up.  So I made those decisions after lots of observations and measurements, carefully taking out stitches, removing partial patterns. I finally finished the quilt top by the end of summer and folded it up for the cedar chest until I moved to Montevallo. I really could not make a decision how to square up the quilt, and making a border was something I couldn't even consider.

In the sixth month after my move, I pulled out Aunt Ola's quilt with the intention of finishing it. I would just dive into it and finish it, border and all. I went to JoAnn's and spent time looking for that fill-in fabric for those right triangles. I didn't go in with any other idea of what I wanted other than small-design fabric. The quilt was bold enough in its original form.  I just depended upon my instinct to find the material.  After looking at many bolts of material, I came upon the scattering-stars-in-the-night design.  It reminded me of all the star quilters who had been scattered around the world and whose spirits scattered the night sky.  Even the lady who cut my yards from the bolt took a double take when she unbolted the material.

So. I measured and measured. I didn't have a giant protractor to figure accurate triangle shapes, so I just trusted myself to get it close. I cut them. I sewed their edges to the folded black hexagons. The result was giant triangular spaces. I had to do something about that, so I used pieces of the quilt that were leftover and appliqued them to the triangles.  Tried to get them somewhat even.  Looked ok.  Thought maybe after the border was on, I'd see how it looked, and maybe applique some more scraps later.

The border was a nightmare.  There wasn't enough material to simply fold over and sew the border, so I started using what I had left over from the muslin for the border.  Measuring, measuring. Cutting.  Ironing folds. Bloodying my fingers as I stuck pins into them, by accident, of course.  As I started sewing the border, I would adjust, tug, try to even it up.  It's ok.  But far from perfect. Far from even. But square enough. Like an impressionist painting, the quilt should be viewed from a comfortable distance; no close examination.

Even in the struggle with the border, my own healing process accelerated.  Aunt Ola's grief led her to abandon her quilt, but then the quilt helped me embrace my own grief as it witnessed the better part of my own healing.  The quilt is beautiful to me, mostly because it is so imperfect and full of intuitive decisions, meditative struggle.  It's a metaphor for the imperfect beauty created by grief. 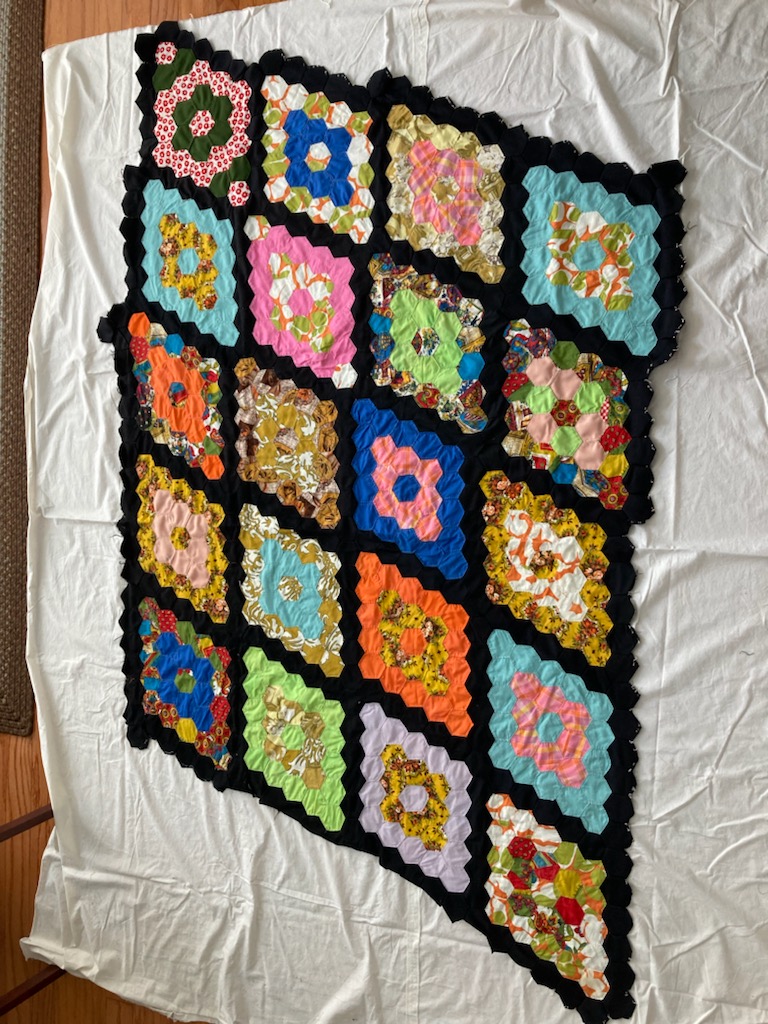 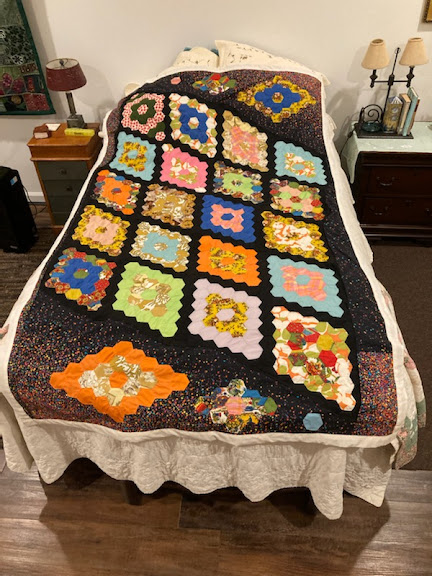 This is beautiful and priceless! I love it and all the work you did putting it together!!!

Thank you so much!

India Henson
Creator of Mellow Yoga for folks who like their yoga more grounded. Creator of Chair Yoga Teacher Training, 12-15 hour weekend workshop for YA CE hours. ERYT-500, YACEP. Teaches yoga to anyone who wants to learn. Happy.

Some of the information from this website is protected under copyright law. Please secure permission before publishing in any form of media.
Cookies are used through the Blogspot Website.